Why I blame the arrogant, foolish West: Our response to this crisis in Ukraine has been to react with mistrust and abuse, and with blatant attempts to worsen the situation, writes PETER HITCHENS

By PETER HITCHENS FOR THE MAIL ON SUNDAY

We have been utter fools.

We have treated Russia with amazing stupidity. Now we pay the price for that. We had the chance to make her an ally, friend and partner.

Instead we turned her into an enemy by insulting a great and proud country with greed, unearned superiority, cynicism, contempt and mistrust.

I have to endure, often several times a day, listening to people who are normally perfectly sensible and reasonable, raging wildly against Russia and Russians.

Once, I was just like them. I had the normal anti-Russian prejudice of so many Western people.

But, by great fortune, I am not like them now. I lived in Russia, I knew Russians as friends. I learned to distinguish between what was Russian and what was Communist.

And I saw something most people will never see – a pivotal event in history, when we could have changed the world for the better. 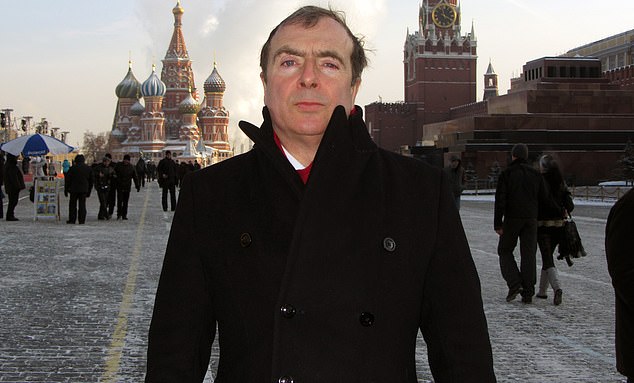 We have been utter fools. We have treated Russia with amazing stupidity. Now we pay the price for that. We had the chance to make her an ally, friend and partner, writes PETER HITCHENS. Above: PETER HITCHENS in Moscow in 2007

One of the most joyful moments of my life was the day Communism died in Moscow.

I could have sworn the sky was actually clearer and brighter, the people looked happy instead of downtrodden – even the revolting, corrupt traffic police, for once, went into hiding.

The litter bins were full of red-and-gold Communist Party membership cards, burning merrily in the late summer sunshine as they dissolved into grey ash.

So I drove my red Volvo through the liberated city, a lot faster than usual, proudly displaying the special yellow number plate (with its ‘K’ for ‘Korrespondent’ and its ‘001’ for Britain, top nation) which had up until then simply made me a target for bribe-hunters and officious cops who prevented me from going on picnics in the missile-crammed woods outside the city.

I even found myself singing the hymns of my childhood.

Just a few days earlier I had been sunk in the most abject gloom. Communism, after a long retreat, had struck back.

The reforming Soviet leader, Mikhail Gorbachev, had been kidnapped in his Crimean holiday home.

Tanks, barrels aslant and tracks grinding the surface into dust, came growling down my majestic Moscow street in the early morning light.

This was not some ancient newsreel. I was there, and it was unfolding before me in full colour.

My elite block of flats, which I shared illegally with dozens of hoary old Stalinists, KGB men and Kremlin loyalists, exploded into exultation as this nasty putsch unfolded.

Neighbours who I’d previously thought of as sweet old pensioners stiffened their spines, grew several inches taller, donned crimson armbands, and set up a propaganda stall in the lobby.

The horrible thing, which I had thought was dying, was coming back to life.

These were the people I hated and had seen defeated in Prague, Bucharest, Budapest and Berlin. 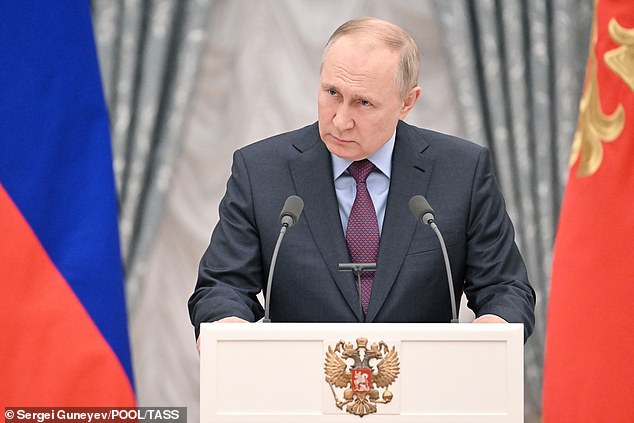 People and governments who now claim to despise Vladimir Putin for his aggression, for his suppression of freedom and for his corruption did not seem to be bothered by these things when his forerunner, Boris Yeltsin, did them

I had thought they were done for. Was it possible they were on their way back, as their fellow Communists were in China?

Would they, like their Chinese comrades, use their tanks to massacre the people in Red Square and re-establish the iron rule of the Party? That day it all seemed terribly possible.

Then, equally swiftly, the tanks turned round and vanished, the putschists lost their nerve and scattered in a haze of vodka and panic, and it was all over.

It was bliss to be alive in that dawn, as someone once wrongly said of another momentous event. I have never got over it.

The black beating heart of an evil empire had stopped. A black sun had been removed from the sky.

All the filthy lies and repressions which I had witnessed in the vast zone of tyranny that stretched from the heart of Germany to the heart of Korea had lost their life force.

I do not think the world has had such an opportunity since 1945. In fact, it was better, for in 1991 there was no Stalin, no Soviet Communist Party.

Like a knight dead inside its armour, the once-mighty Soviet armed forces might look from a distance like a menace, but they were rotten and done for, and in a matter of months would keel over and fall to the ground. 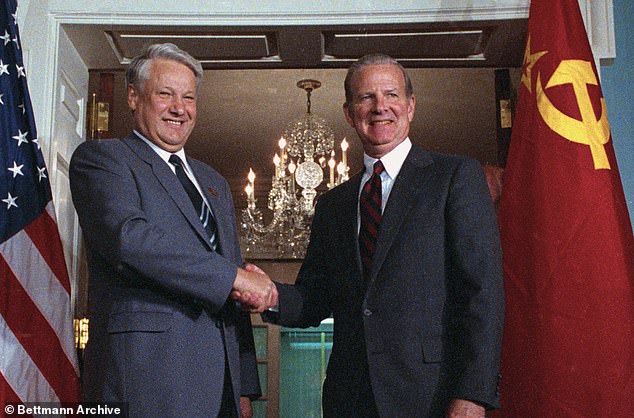 Yeltsin (left), a former Communist machine politician with a far from perfect past, ordered tanks to shell his own parliament, while his police shot down demonstrators

In fact the problem quickly be-came trying to find any way to govern that vast country at all, as the spells and incantations which had kept it together no longer worked.

What an opportunity this was for the rich, stable, well-governed West to come to the rescue.

Had not Marshall Plan aid revived and rebuilt a ruined Western Europe after World War Two?

Had Britain and the other occupying powers not vowed to bring democracy, freedom and the rule of law to a prostrate Germany?

Was this not a moment for an equally unique act of generosity and far sight?

No it wasn’t. What was unleashed instead was an army of carpetbaggers from the West, shouting about the free market, who quickly found their match in the crooks and corruption experts, many of them high Communist officials, who rushed to exploit and fool them.

At the same time formal ‘democracy’ was introduced – that is to say, there were some elections, which were of course rigged by big money.

And in the minds of Russians whose savings were vaporised, who were turned out of their homes by thugs, who lost their jobs and pensions, democracy became a swear word.

People and governments who now claim to despise Vladimir Putin for his aggression, for his suppression of freedom and for his corruption did not seem to be bothered by these things when his forerunner, Boris Yeltsin, did them.

It is a fascinating contrast.

Yeltsin, a former Communist machine politician with a far from perfect past, ordered tanks to shell his own parliament, while his police shot down demonstrators.

He savaged Chechnya. His own re-election to the presidency stank of money.

Corruption under his rule was so flagrant and grotesque that, when he quit, many Russians welcomed with relief the return of what the film-maker Stanislav Govoryukin called ‘normal corruption’.

Yeltsin, often paralysed with drink, was a welcome guest in the West, even the White House, despite his embarrassing and crude behaviour.

But Yeltsin, unlike Putin, did nothing to control the oligarchs, allowed the West to continue its rape of Russia’s economy, and – above all – made no protest against the humiliation of his country by the continued expansion of Nato eastwards across Europe.

This was by then a more or less openly anti-Russian alliance (who else is it directed against?).

It wasn’t just that the West had promised not to do this, as numerous documents now show beyond doubt.

It was that it was stupid, and created the very crisis it claimed to be protecting us against.

Interestingly the leading protesters against this Nato expansion were not Russian nationalists but highly intelligent and experienced independent figures.

One was the Russian liberal politician Yegor Gaidar, a man Western leaders claim to have admired.

He prophesied with total accuracy that the policy would strengthen hardliners and nationalists in the Kremlin.

Then came the brilliant American diplomat George F. Kennan, a man nobody could accuse of being soft on Communism.

But, unlike so many others, he could tell the new transformed Russia apart from the old USSR.

Kennan had been architect of the USA’s policy of containment of the USSR. He came out of retirement to deplore Bill Clinton’s support for pushing Nato east. I quote his prediction at length because he was so right.

‘I think it is the beginning of a new Cold War,’ said Mr Kennan. ‘I think the Russians will gradually react quite adversely and it will affect their policies.

‘I think it is a tragic mistake. There was no reason for this whatsoever. No one was threatening anybody else.

‘This expansion would make the Founding Fathers of this country turn over in their graves.

‘We have signed up to protect a whole series of countries, even though we have neither the resources nor the intention to do so in any serious way.

‘[Nato expansion] was simply a light-hearted action by a Senate that has no real interest in foreign affairs.

‘What bothers me is how superficial and ill-informed the whole Senate debate was.’

He added: ‘I was particularly bothered by the references to Russia as a country dying to attack Western Europe.

‘Don’t people understand? Our differences in the Cold War were with the Soviet Communist regime.’ Exactly.

After 1991 Russia had, for the first time since the Bolshevik putsch of 1917, got the chance to build a new and free society.

As Mr Kennan put it, Nato expansion was an insult to Russian democrats.

‘We are turning our backs on the very people who mounted the greatest bloodless revolution in history to remove that Soviet regime.’

He asked why East-West relations should ‘become centred on the question of who would be allied with whom – and by implication against whom – in some fanciful, totally unforeseeable and most improbable future military conflict’.

These questions demanded an answer, and never got one.

It is my unflinching view, amid all the current anti-Putin hysteria, that the leaders of the West have made the crisis we now face today out of thin air.

I also happen to think that many of them, for varying reasons, are such lightweights that they enjoy the chance to posture and threaten – and do not realise this is deadly serious.

In hints, in pleas, in public speeches and private approaches, Russia has begged us for years to show it the most basic respect.

Our response has been to react with mistrust and abuse, and with blatant attempts to worsen the situation in Ukraine and Georgia, two incredibly dangerous flashpoints where real war might all too easily begin.

Having been there when everything was possible, on that Moscow summer’s day in 1991, I cannot forgive or forget this great missed opportunity to bring Russia into the free and lawful world.

And I think the peoples of the West should think very carefully before they follow the path to a new and bitter division of Europe.

It is wholly avoidable. It gains us nothing. And it might lose us everything.